What is Spoliation of Evidence?

About
Nelson is an experienced attorney representing clients all over the State of Alabama for injuries they received in car accidents.
Last updated on: September 15, 2022
This article provides an answer to the question of "what is spoliation of evidence", and discusses why you should be spending spoliation letters in your civil cases involving companies. 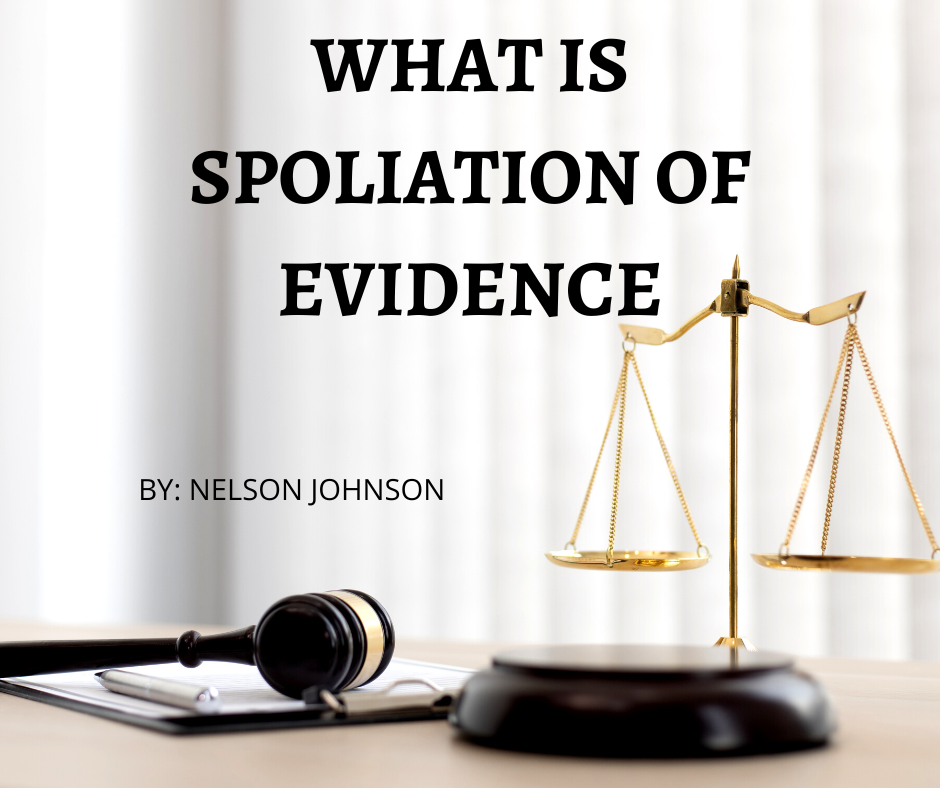 What is a spoliation letter?

Spoliation letters are a mechanism of putting a company or individual on notice that litigation is likely to occur regarding a specific event and identifying what evidence you want them to retain for purposes of that litigation. You will want to send this letter via certified mail with a return receipt requested so that you have proof that it was sent and received. Send it to the registered agent for the company or to the individuals home that you suspect to be in possession of the evidence you are requesting. Try to be as broad as possible in your request while identifying types of evidence, you want to cast a wide net to ensure you capture all possible evidence they may have.

Why Send a Spoliation letter?

Ok, now you know what spoliation of evidence is, and you know that you need to send a letter, but you may be asking why you should send the letter. In Alabama, and in most if not all States, there are pretty severe consequences for failing to maintain evidence after a spoliation letter is received. In Alabama one of the consequences for spoliation of evidence is for the judge to instruct the jury that they can assume the evidence that was destroyed would have been unfavorable to the party that spoliated it.

That negative presumption the jury is allowed to make can be absolutely case altering. A jury looking at an Alabama trucking accident where the Trucking Company is assumed to have destroyed evidence that was bad for them is very likely to provide a large verdict. Juries hate feeling like someone is lying to them or keeping things from them.

So, by sending the Spoliation Letter you are placing the company in a position where they must retain all the evidence related to the accident, because failure to do so can result in a catastrophic consequence. In many cases this will result in you getting good evidence for you case which otherwise may have been lost due to standard business practices of purging certain types of documents periodically or recording over video of your accident because the cameras record on a loop. In some cases the Company will only retain certain things and fail to secure video or some other type of evidence before it is purged. If that occurs the trap has sprung.

When do you send the spoliation letter?

Send you spoliation letter as quickly as humanly possible after the accident. Many smaller companies record over video within a few days, and even large corporation will only have it for a week or two. Document retention policies vary largely between companies and industries. To be safe you should try to get that letter to the company within a week of the accident. If documents, video or physical evidence is destroyed before that letter is received then they will likely escape the severe consequences of spoliation of evidence because they can claim they were not on notice that litigation was likely to occur.

For clients this means the need to hire an attorney quickly is unimaginably important when one of the defendant's is going to be a company. For attorneys, we do not always get the case within the week of the incident occurring, but you should still aim to get these letters out immediately upon signing the case. As discussed above, companies have different retention timelines and just because it has been six months since the accident occurred doesn't mean that sending a spoliation letter is meaningless.

What happens when evidence has been spoliated before the letter is sent?

In these cases you are going to have to rely heavily on the evidence that a reasonable person would have anticipated litigation as a result of the accident/incident which is the basis of your lawsuit. The letter is powerful because you are specifically putting them on notice of the fact that litigation is likely to occur. Without the letter there is much more wiggle room for the Company to slip out of responsibility for their actions. You should conduct significant discovery into their standard operating procedures (SOPs) with regard to document retention, incidents involving injuries, and in-house communications related to the accident/incident.

Your goal is to show that the company was clearly preparing for litigation. Did they conduct an incident investigation? Did they prepare an incident report? Did they take witness statements? Was an ambulance called for the injured party? Was there insurance company put on notice of the event? Was anything retained or disposed of outside of the normal SOPs? These questions and many more will help you in building up evidence to show that the company was not just anticipating litigation, but was actively preparing for it. If you can show this through sufficient evidence, the next step is to show the judge that in those preparations they specifically retained all of these statements, incident reports, and by putting their insurance on notice, but suspiciously and conveniently failed to retain a copy of the video that actually showed the event.

How often do the Courts sanction parties for spoliation?

Just because you can show spoliation occurred doesn't mean you will automatically get the sanction of the negative inference applied to the defendant. However, we can set ourselves up for the best possible chance at getting that sanction applied by getting that letter out early, getting confirmation that the letter was received, and then pressuring the Defendant's in discovery, party depositions, and corporate representative depositions about why certain evidence was not maintained.

Nelson Johnson is a Personal Injury Attorney that is licensed in Alabama and Georgia. His primary area of practice is focused on Auto-Accident litigation. Nelson is also heavily involved with his local youth soccer program serving as one of the founding board members, an assistant coach, and a licensed US Soccer Grassroots Referee. www.simpleguidetoalabampersonalinjury.com/trucking-accidents